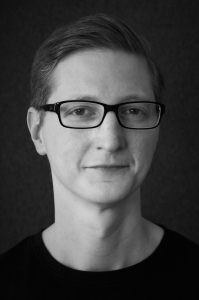 Florian Puchert began his path into the film industry via an internship at the Munich production company K5 Film. He later worked there as a junior producer.
But because his real focus has always been writing and developing, he gave up being a producer and wrote and directed image films, short films and music videos His short films have been screened at 120 international festivals and have won several awards.
Florian’s first filmed screenplay was the English-language horror film BLOOD TRAILS (2005), which he co-wrote with Robert Krause and was distributed in the U.S. by Lionsgate. Current credits include the rewrite of the German-Chilean thriller series DIGNITY (2019) for Joyn and the ARD three-parter UNSERE WUNDERBAREN JAHRE (2020). He is currently working on several series and feature film formats of his own.
Florian Puchert holds an honorary professorship at the HFF Munich and has been giving workshops and writing seminars there with his writing partner Robert Krause since 2013, e.g. “Drehbuch in 23 Tagen”. Together they have also led various Writers’ Rooms for companies such as Bavaria Fiction and UFA.