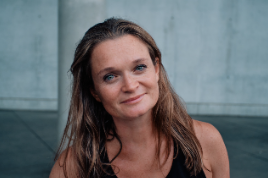 Natalie Spinell was born in Munich, Germany in 1982 to a Czech mother and an Italian father. Ever since she was a young girl Natalie took part in major and independent German film productions like POLIZEIRUF 110 or HÖHERE GEWALT. Recently she took part in the TATORT-Schutzmaßnahmen in the main cast. After completing the A-levels in 2003 she took a trip around the world and in 2006 she moved to New York to study acting at the Lee Strasberg Theatre Institute. Since 2007 she has been studying directing at the University of Television and Film in Munich and won several awards with her shortfilm VIKI FICKI and finished University with the the miniseries SERVUS BABY, where the 3rd season is in the making and she won the Bavarian TV Award for best young filmmaker with.
back