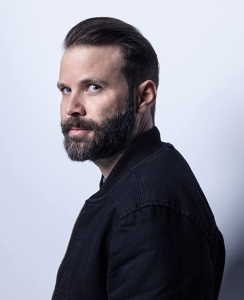 Baran bo Odar was born in Switzerland in 1978 and studied directing at the University of Television and Film Munich. He has worked on several commercials, music videos and award-winning short films.
His feature debut THE SILENCE (2010) premiered at the Piazza Grande in Locarno and earned him a spot among Variety’s “Ten Directors to Watch” in 2011.
His next film, WHO AM I, was a German box office hit. Warner Brothers has signed a deal to remake WHO AM I.
His first U.S. film was the action thriller SLEEPLESS, starring Jamie Foxx and Michelle Monaghan, which was released on February 24, 2017.
Together with Jantje Friese, he is the showrunner of the NETFLIX Original Series DARK, which launched worldwide on Netflix on December 1, 2017 in over 190 countries and is now one of the most watched series on Netflix.
He is currently working with Jantje Friese on their next series project 1899 and Tyll for Netflix, produced by their production company Dark Ways.